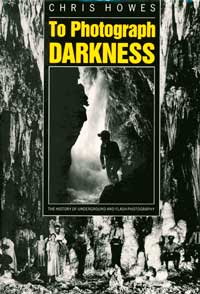 THIS book is a pleasant change from the prolific how-to-do-it or coffee table books. The author has written an in-depth history of underground photography resulting from ten years of research; though the main subject is caves, those interested in mines will not be disappointed.

The book is a history of underground photographic equipment and techniques and, in parallel with, details the sites and products that exploited these methods. To complete the overall view the introduction deals with the early development of photography itself. That accomplished, the main section of the book concentrates on the sequence of development of devices used to illuminate underground scenes leading to the electronic flash and slave units so common today. Associated with this technical aspect he describes the activities of these early inventors using their inventions of equipment that had been developed from the ideas of other innovators, sometimes with disastrous results.

The early work of Nadar in the sewers and catacombs of Paris in 1861 using Bunsen cells demonstrated that sunlight was no longer essential to produce photographic images. Alfred Brothers operating in Manchester developed devices to exploit the potential of magnesium to produce photographic portraits. With this equipment he produced the first interior cave photograph in Blue John Mine in 1865; many others had produced views of entrances by about 1860.

The development of tourism, due mainly to improved transport, expanded the business of the show cave and the souvenir trade exploded. The use of photographs as mementoes was to become huge business from the 1870s to the end of the century. At Mammoth Cave, Kentucky, Waldack successfully produced a series of photographs of the cave interior together with a large range of stereo photographic cards.

Development of magnesium lighting devices continued well into the 20th century and, together with the improvement of the negative medium, enabled caves [and] mines [to be] extensively photographed by the end of the 19th century. The first flash bulb was developed in 1927 and became the mainstay of lighting techniques for the next 40 or so years, leading to the modern electronic flash guns and slave units.

The establishment of the famous photographic companies date from this period and the photographic industry developed rapidly during the late 19th century. Frith, Tuck, and Valentine in Great Britain, Kerry of Australia; Schaber, Muller, Underwood, Ben Hains are a few of the photographers that have left us records of caves in the 19th century.

The author deals with the activities of these and others in great detail. Occasionally the author switches from one country to another and the reader is sometimes left wondering where exactly he is at that moment.

The later chapters deal extensively with the French cave photographers of the late 19th century, including Martel’s activities at Padirac. In Britain, the pioneering work of Harry Bamforth, Balch, Baker and Savory is well covered. The development of the flash bulb led to one of the greatest challenges of the day – the photographing of the Big Room at Carlsbad Caverns, New Mexico, in the 1950s. Early work at the site had been carried out by Nymeyer in the 1930s by Helm developed a technique of setting off multiple flashbulbs simultaneously and in 1952 he produced his picture of the Big Room using 2,400 flashbulbs at the same time.

Mine enthusiasts will not be disappointed by the coverage in this book. Chapter 7, Hand Hewn Rock, gives an in-depth coverage of the photographer’s solutions to early mine photographs illustrating the chapter with photographic sources of the USA and this country [UK]. Cine films produced in caves is covered in Chapter 10.

In a book such as this that is packed with facts, errors are bound to exist. Those that the reviewer notices may be considered of a minor nature and does in no way impair the basic outline that the author is developing. The book is copiously illustrated with examples from most of the major inventors or photographers though one wishes that they were produced with more contrast. The method of referencing source material (Appendix 5) is particularly good as it allows the author to expand a topic without interfering with the storyline and avoided the often untidy footnotes. Appendices 1–4 include a useful glossary, units of measurement, chronology of important dates and a note on the dating of photographs – all in addition to a comprehensive index.

The author has succeeded in conveying his enthusiasm for the subject that could have been developed in a very dry and dull manner. Anyone with the slightest interest in underground photography will find this book an interesting and entertaining read and will find that the book is also a valuable source of future reference. At £25.00 it is extremely good value, well produced by the publishers and an essential addition to one’s bookshelf.

Further reviews appear on the To Photograph Darkness page