The Story of Banwell Caves 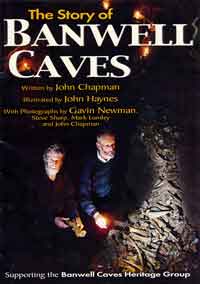 BANWELL Bone Cave on Mendip is not one of the better known showcave attractions; it is rarely mentioned in the same sentence as Cheddar Caves, for example. There is no extensive set of passages, no system extending deep into the hillside and, perhaps due to this and access restrictions, it is somewhere that most cavers have failed to visit.

Yet that is a shame, for the complex presents much of interest. In 1757 Banwell Hill was mined for lead, calamine, ochre and barytes and when miners broke into a cavern they named it Banwell Stalactite Cavern. Its location was subsequently lost, but in 1824 a search began to find the lost cave and, in turn, this led to the discovery of a second chamber, this time one rich in archaeology. It contained thousands upon thousands of animal bones, most long extinct in the UK. The Bishop of Bath and Wells, secure in his knowledge that the Bible explained all, encouraged visitors and thus began the use of Banwell as an attraction.

Today, the Stalactite Cavern is only accessible to cavers, but the Bone Cave is open for led visits either by booking a tour or on specified open days when the many old surface structures can also be inspected, from a tower to a pebble-covered summerhouse which, along with many other parts of the site, are being restored (see the website at: www.banwellcaves.org for further information on these and entry dates). All of which introduces Banwell’s latest addition: a 44 page A5 booklet, printed in colour throughout, titled The Story of Banwell Caves.

Cavers will find some elements of the booklet familiar to them by reason of style: this is largely a caver production! It is written by John Chapman, who first visited the caves in 1950 and today is chairman of the Banwell Caves Heritage Group, and is richly illustrated with fine line drawings by John Haynes (one of the owners) and photographs by John Chapman alongside Gavin Newman, Steve Sharp and Mark ‘Gonzo’ Lumley; Gonzo also designed the guide. It offers the reader a nice blend of history and details of modern conservation and restoration work in what is today parkland in private ownership.

Perhaps the best bit is the entirely reasonable £5 price tag, plus £2 p&p from John Haynes, The Caves, Banwell BS29 6NA. Before rushing with your payment in the post, check that your Mendip club doesn’t have a stock held on behalf of the caves – but either way, The Story of Banwell Caves is well worth the money, especially given that all profits are going back to the caves to support their conservation and restore the follies.