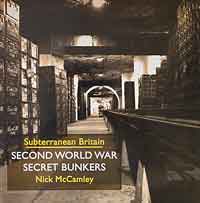 A VOLUME on the stone quarries at Bath, published by Folly Books in its Subterranean Britain series, received a very positive review in Descent (225). However, that was not the only relevant title of interest and hence, although it is older, we come to Nick McCamley (whose works have a certain following) and Second World War Secret Bunkers.

Lest readers think that the subject has little bearing on underground exploration, think again as, even though many sites are closed to cavers and mine explorers, others are not (or are open under specific conditions) or have surface remains that in themselves are worth a visit. Here we have sites such as the ‘underground quarries’ at Monkton Farleigh on Mendip, the underground factory at Drakelow in Derbyshire and an RAF bomb store at Llanberis in North Wales. Indeed, these three examples – together with repositories for art treasures and Admiralty storage sites – represent the book’s five sections, to which add an introduction and bibliography (but no index).

Just as with the prior Bath Stone Quarries, both the photography and production quality is very high, especially so for reproduction of older black and white photographs which can so often look poor in comparison with their modern equivalents.

It is tempting to imagine Second World War Secret Bunkers as a mere book of illustrations, but the text and captions are as revealing as the images; the book carries a sense of history with a solid grounding in fact.

Some of the most fascinating components are the many contemporary maps and surveys. The introduction reveals much about these, and that we have in our hands the end result of forty-five years of research. In 1967 Nick McCamley discovered a disused army base at Monkton Farleigh (broadly speaking, in best schoolboy story fashion, while investigating the remains he fell into the underground tunnels) that he later learned had been the largest subterranean ammunition depot in the world.

In 1984, Nick and his wife acquired the site and this opened up many hitherto secret documents – then, a year later while beginning restorations, one of the old workmen turned up and with him came a host of photographs and plans covering all the government quarries in Wiltshire. These provided the nucleus of the historical illustrations for the book.

If you are a dedicated ‘underground structure explorer’ and a member of Subterranea Britannica (see www.subbrit.org.uk if the group is new to you), you may already know of Second World War Secret Bunkers. If not, take a look – given its outstanding quality, the volume is excellent value.

Plus, this review would not be complete without mentioning two similar books from Folly: Mark Dalton’s The Royal Observer Corps Underground Monitoring Posts and Nick Catford’s Cold War Bunkers, the latter also being part of the publisher’s Subterranean Britain series. For further information see www.bradford-on-avon.org.uk, where you can pick up links to page-turning videos – albeit with some annoying music – and enjoy a flavour of the contents.