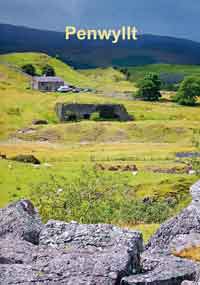 MEMBERS of South Wales CC (and now Wealden CMS – see Descent 214) will know the area around Penwyllt in the Swansea Valley extremely well. This is the location of the clubs’ headquarters, where cavers gravitate for trips to the underlying Ogof Ffynnon Ddu system and, indeed, this was once a far more thriving locale. Here could be found brickyards, a tramroad, a railway and station; indeed, there was once a community here. The row of cottages now occupied by SWCC was once the home of miners and fronted Powell Street, whereas the Wealden now reside in what was once Penwyllt Inn (even a century ago known colloquially as The Stump).

Times have changed. Many of the former streets lie as rubble, the old inclines and quarries silently being reclaimed by the moorland at perhaps the same speed at which memories fade. Thankfully, though, not all is lost as Peter Burgess has recorded the history of the immediate area in Penwyllt. In this he has set a benchmark of sorts – this caving Mecca cried out for his treatment, which provides not only a history that is recounted in a very readable manner, but also a set of invaluable maps and historic photographs, plus (going the extra and invaluable yard) an index. Others might pick up on the idea to cover their own district, recording a little of a club’s history along with any associated industrial archaeology and a smattering of cave lore.

Penwyllt was not written with cavers in mind, but they will certainly enjoy it alongside historians (not being the primary readership, cavers may find the chapter on OFD fairly simplistic – but the book is subtitled ‘The story of a South Wales community’). That does not degrade its standard in the slightest and the book closes with three walks, themed for the area’s tramways and railways and the industries surrounding Penwyllt village. Even merely reading the book I can picture so many of the scenes described, and now understand them better.

Penwyllt is published by the author and is eminently affordable, evidently being priced to encourage its dissemination. A copy will wend your way if you send a cheque (payable to Peter Burgess) for £9, including postage, to: 8 Trotton Close, Maidenbower, Crawley RH10 7JP.