Caving news received too late for inclusion in Descent ...

External links will open in a new window.

The second circular for the forthcoming 2013 International Congress of Speleology, to be held in the Czech Republic, has been released. This is an event that all cavers of any experience will enjoy, so head for the congress website to download a copy and find out the latest details. Descent (229).

Jenny Potts, for DCA, has issued a warning that there are serious problems with carbon dioxide in Nettle Pot. A warning has been hung from the bolts under the lid and cavers are advised that they should stay away until the problem has been investigated and dealt with. Descent (228).

The Starless River mobile caving shop will be at the following locations during October and November 2012:

Ralph Johnson has a set of Descent from issue (20) onwards to sell in aid of Derbyshire CRO. E-mail Ralph [link removed] for further details. Descent (228).

In May 1952 some fifty or so cavers met at the George Hotel in Castleton and agreed to form the Derbyshire CRO. Initially, this was a fairly loose organisation relying on a card index callout system operated by the police and using club equipment, supplemented by some very basic kit owned by the Mountain Rescue Committee, kept in a doctor’s loft in Castleton. A handful of minor but successful rescues in the 1950s was followed by the stupendous but unsuccessful 1959 attempt to rescue Neil Moss from Peak Cavern.

After this, the organisation was overhauled, reorganised and gradually grew into the DCRO of today, operating from its new base at Buxton fire station. In its sixty years DCRO has so far been called out on 356 occasions, going to the aid of over four hundred people and nearly fifty animals.

Past and present team members and friends of the organisation will be celebrating its Diamond Jubilee in Hope at the end of September. If anyone with past connections with DCRO would like to attend please contact Clare Harley for details. Descent (227).

An interesting new document has been published by Natural England under the title of Managing Geological Specimen Collecting: Caves. As might be expected, this has a conservation-rich approach; copies of the pdf may be downloaded from Natural England. Descent (227). 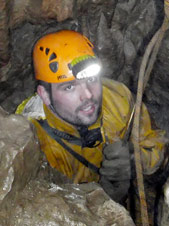 John Radburn has requested help to highlight a missing member of Lincoln CC, Jakub Gladski (known as Jay). John writes that 2012 started well with a superb trip down Lathkill Head Cave in the Peak District and the group returned to Lincolnshire in jubilant mood. However, the next day, 2 January, Jakub picked up his caving gear from John and disappeared; a few days later his gear and wallet were found in his car in Skegness. Though there have been two unconfirmed sightings, he has not been heard from since.

Jakub is 31 years old and described to be of stocky build, 5ft 10in tall, with hazel/brown eyes with a moustache and short dark brown hair – more details are available online via the Missing People website (the photo was taken during the Lathkill trip). There is concern for his safety and Jakub is urged to make contact by phone or e-mail through the organisation's confidential service. Descent (226).

The dates and venue for the annual CHECC event have been confirmed as 9-11 November 2012 at Yoxter, near Priddy on Mendip. Descent (226).

An International Congress of Speleology is held every four years; the next will be in Brno in the Czech Republic from 21 to 28 July 2013.

The congress will, just as its forerunners, be organised around talks and workshops, films and competitions, but with a strong element of pre- and post-congress camps and caving excursions during the week-long event. Czech cavers and diggers are among the most motivated and best in the world; in this region you may experience a range of caves from stunningly easy but impressive tourist sites to some harder trips that might challenge even the best. The Moravian karst, the largest caving region in the country and near to Brno, contains more than 1,200 known caves and these are definitely not to be missed. State-of-the-art conference facilities have been booked in the centre of Brno.

Bear in mind that the Czech karst is readily accessible from the UK, being only a little further than driving to the south of France. Whether you are looking for a great caving experience or simply wish to spend some time in this historic karst area, you should not pass up this opportunity. The organising committee has prepared the first circular, downloadable here, or head for the congress website for further information.

A conference organised by the Cambrian Caving Council at Penderyn Community Centre was announced in Descent (225). Apart from the date of Saturday 26 May, no further details were available as the issue went to print, but these have now been released. The cost is £5 for the day, a subsidised price, but space is limited so it is essential to prebook your place by e-mail. Topics in the programme include first aid and self rescue, cave life, access and coinservation, basic underground photography and surveying, and the geology and hydrology of Welsh caves. The Sunday will see some additional underground workshops included in the price. Descent (225).

The dates and venue for the annual Hidden Earth national caving conference have been finalised and the event will take place over the weekend of 21-23 September at Thomas Whitham Sixth Form in Burnley. Descent (225).

Karl Martin reports a rack lost in Swinsto Hole's Long Crawl on 17 March. E-mail him direct if you find it ... (Descent 225)

At Nettle, Martyn Grayson reports that the two pull-throughs are no longer operative: the steel karabiners on one have worn through to almost half their thickness and the second has jammed (though a fixed rope has been installed to gain access to a dig). Both will be replaced as soon as possible using a cable and ring system.

New handlines are being placed on the two traverses in JH's Cartgate as part of the BCA investigation into how handlines survive use underground (see Descent 224); the placement is not DCA's responsiblity to maintain as fixed aids. Enquiries should be directed to Roy Rodgers and further information on the scheme may be found on the BCA website. (Descent 225)

The Great British Countryside is a new series of television programmes being shown on BBC1, starting on 16 February 2012. The second of these, to be transmitted in 23 February, features the Craven PC meet at Gaping Gill. (Descent 224)

Kevin Dixon is constructing a limited production of DistoX1 boards for the Disto A3; cave surveyors will know this is a specialised piece of electronic surveying kit. Kevin has located some of the obsolete parts to make 100 boards which should be ready to ship around March or April; this is likely to be the final production of this board (price is not yet determined). Anyone interested should contact Kevin by e-mail. (Descent 224)

The Cambrian Caving Council is organising a conference at Penderyn Community Centre on Saturday 26 May 2012. Sessions will include photography, geology, cave life, surveying, conservation and dealing with emergencies, with training aimed at both newcomers and experienced cavers as an integral theme. (Descent 224)

The dates for the postponed event reported on p5 of Descent (224) have been finalised. The Cave Technology Symposium will now be held in the Priddy, Mendip area over the weekend of 9-10 June, thus changing from the former one-day event to two days, with practical demonstrations on the Saturday and more formal presentations on the Sunday. Admission is free for BCRA members or £3 for non-members for either or both days. For further information e-mail Mike Bedford (BedfordMD [at] aol.com). (Descent 224)

The report on White Nose Syndrome on p7 of Descent (224) can be updated with a new estimate for the number of bat deaths that have occurred in North America since the outbreak in the winter of 2006. The US Fish and Wildlife Service now places the fatalities at between 5.7 and 6.7 million (not including the current winter), upgrading this from the prior 2009 total of 1 million.

The revision was used as part of a submission that obtained $4m of funds for federal research in 2012. Some cavers suggest that the total loss estimate is high, as 6.5m would represent the total loss of Little Brown bats, whereas the population still fights on. (Descent 224)