Exploring the Limestones of South Devon 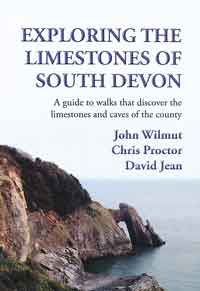 THE authors of Exploring the Limestones of South Devon neatly sum up its theme in the subtitle: ‘A guide to walks that discover the limestones and caves of the county’ and proceed to pack its pages with photographs and descriptions. Sensibly, the walks are concentrated into five discrete areas rather than attempting to scattershot Devon and are chosen to provide a range of difficulty (easy to demanding), with subject matter – all in colour – encompassing the geology, caves and anything of general interest.

The five regions – urban Ply­mouth, Yealmpton, Torbay, Buckfastleigh (naturally, given this is the publisher’s base) and Chudleigh – provide us with thirteen walks. Each opens with an OS-based map showing the route, then presents some basic information (distance, starting grid reference, access by bus or car and so on) before launching into the description. Here, as should all good guidebooks, instructions on which way to proceed and what to see (turn left, look right ...) are matched with numbers on the map, complete with photographs that go a long way towards telling the reader what to expect and thus help in choosing which walk to follow.

One of the best features is the inclusion of ‘information panels’, which are particularly apposite for cavers. The thirteen panels are scattered through the text and range from short boxed details to a full page about, for example, a specific quarry or general details about fauna. Thus we can read about sea life, cave life, limekilns, forts and cave formation, let alone named caves such as Kents Cavern and its excavation, Windmill Hill Cave and its association with William Pengelly, and gull caves. The geology sections and maps are extremely well presented.

Exploring the Limestones originated as an idea that arose from BCRA’s Cave Studies series of books, being an entirely separate publication yet acknowledging that genesis. Indeed, it was prepared for the joint Pengelly/BCRA field meeting in May (see Descent 239) and would have served it well.

Unfortunately, some page numbers on the contents page are incorrect, some of the layout would have benefited from a little more space and for a guidebook that will see some heavy handling, a stronger binding would have been a good move.

Nevertheless, this is a colourful, fact-packed publication that, at £8, is very attractively priced. If you are interested in adding it to your bookshelf, direct your enquiries to the William Pengelly CST secretary, Alan Finch (e-mail: [email protected]). It will surely entertain and inform anyone interested in the region – indeed, it will make you want to take a walk.