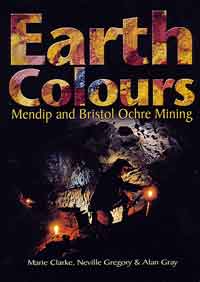 EARTH Colours concerns the fascinating history of ochre mining in the Bristol and Mendip area, at one time the principal region for sourcing the pigment. That so much local knowledge had been lost about the nature of the mines and associated resources such as iron is perhaps not surprising, given that operations stretched back for centuries (although some were still operating into the second half of the twentieth century). It is indeed a pleasure to find that the authors’ research has uncovered a wealth of detail and this has been presented so well (courtesy of Mark ‘Gonzo’ Lumley’s layout) in book format.

The research goes back two decades, starting when Marie Clarke and Neville Gregory became obsessed with discovering more about the area’s old mines and the people who worked them, following an interview with one of the ex-ochre miners of Sandford Hill. Move forward in time and we find that Marie died in 1994, leaving the research unpublished until in 2006 her daughter caught sight of the manuscript and, after coming across caver Alan Gray, the project to bring it to print began.

There are history books and history books, dry and dusty or full of life; Earth Colours decidedly lies in the latter camp, being packed with fact but well written so that the reader wants to learn a little more, spurred on by the evocative photographs that are backed up with maps and surveys. Cavers will know of many sites, from reports and articles in Descent if nowhere else, and we have the stories of how such places as Loxton Cavern and Shute Shelve Cavern were rediscovered alongside workings at Banwell and Blagdon, Winford and Winscombe. It contains a perfect mix of social history, as tales of the miners abound from a murder most foul to a plea for better working conditions and wages (with 33 signatures written on a segmented circle, so that nobody could be identified as a ringleader).

Also important is how the emphasis on Mendip mining must change with the appearance of this publication. Previously, anyone might have been forgiven for believing that lead was the primary extract given the prominence of well-documented lead workings; now, the balance is redressed with ochre and its miners taking its rightful place in history. That ochre itself was so varied in colour and uses is highlighted by Alan, who noted that while compiling the index (yes, it thankfully has one) he found that some 56 terms were used for the pigment.

At £20 you get plenty for your money – these are packed pages with text tight to margins (though a few pages at chapter ends are, strangely given the wealth of material, blank). In addition, note that the publisher is the Mendip Cave Registry and Archive, which means that profits will help support the publication of a new Mendip guide – further details appear on the MCRA website (www.mcra.org.uk). So, add £4.30 for postage and send off your order without delay then sit back and enjoy the read.