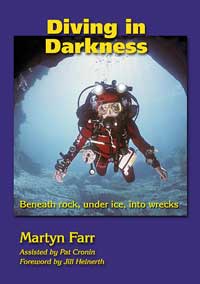 MARTYN Farr needs no introduction. Having devoted his life to caving, his name is synonymous with cave exploration, cave diving, underground and underwater photography, and writing.

Most cavers have read at least some of Martyn’s words; apart from being Descent’s correspondent for Welsh news, there are his many books. My first encounters with Martyn’s literary efforts were The Darkness Beckons in 1980 and The Great Caving Adventure in 1984, a book that entirely captured my imagination and which I read repeatedly – it inevitably encouraged my own enthusiasm for cave diving.

Since that time Martyn has released a multitude of other titles such as Darkworld and Underground Wales. With more than thirty years of cave diving under his belt and having developed that range of writing ability, Martyn’s experience makes him well placed to write his new book, Diving in Darkness.

The immediate assumption is that Diving in Darkness focuses on cave diving – which it does, but Martyn pushes the expected limit in his usual manner, to include considerably more. He expertly guides the reader through overhead environments (diving beneath a ceiling, such as caves, mines, wrecks and beneath ice), with chapters covering every relevant topic; it goes beyond being a good read and becomes an essential reference.

On picking up Diving in Darkness, flick through it before settling down to read it. The multitude of fabulous photographs, mostly taken by Martyn from around the world, jump out immediately. The standard of the photographs is superb and they are presented in full colour from cover to cover. And I mean that literally – in the 128 pages there isn’t a single spread not adorned with colour (and that includes the index!).

The book opens with an excellent foreword by Jill Heinerth, a cave diving instructor with a wealth of credits that include ice diving in the Antarctic, and is followed by an introduction about training and taking the first steps into diving and overhead environment diving. The action starts in chapter one, explaining the overhead environment perspective to associated problems and dangers, including the fact that there is no air surface to escape to, silt and darkness problems, and how to deal with these issues. It evens goes into landowner relationships and con­servation of the environment.

Martyn then covers the huge topic of equipment, making a clear distinction between an open water diver (depending on someone else in the water to help out if problems develop) and someone in the overhead environment (where self-sufficiency is essential). Everything from suits to cylinders and buoyancy is detailed, showing configuration options. There are very useful photographs in this section; I particularly liked those ‘in the field’ and that on p41 in the lighting chapter, showing a ‘modified’ Super SaberLite with a removed clip to prevent entanglement risk.

The book guides us into route-finding and safe navigation; covering line reel options, line laying techniques, tagging and ‘out’ markers. For me, this chapter alone – it is extremely well written – proves the value of the book and is clearly written by a grand master.

Further chapters cover air management, depth and decompression, and something that is often overlooked in all avenues of diving: stress. How to perform under stress, with the emphasis on training, is the headline here. Importantly, Diving in Darkness is not intended as a stand-alone guide to overhead environment diving; it is meant as an adjunct to proper instruction, and as an aid of this nature it is invaluable.

Dive planning, underwater hand signals, information about diving solo and in teams, techniques for buoyancy and trim, diving in poor visibility and dealing with emergencies (loss of visibility, light failure, line entanglements or running out of air) are all included, plus scooters, diving with gases other than air and rebreathers. Finally, appendices cover further reading, training organisations, calculating gas requirements, ice diving (well worth reading for entertainment value, even for divers who never intend to venture below an ice ceiling), wreck diving and, finally, a glossary.

This is the book that I wanted to read twenty years ago. Now it’s here and I cannot recommend it enough for those taking their first steps into the overhead environment, or those who think they already know it all and fancy some good reading with excellent pictures. Even old hands might pick up a tip or two from Martyn’s distillation of thirty years’ experience. Read and enjoy.

Further reviews and information appear on the Diving in Darkness page