Decades in the Dark 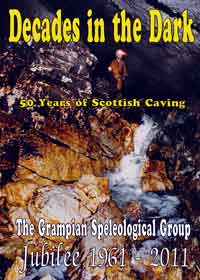 CAVING clubs do not exist in isol­ation: they have members and it is the members that make the club. When it comes to club histories, when anniversary publications are prepared, some editors forget that fact. Not so Goon (aka Alan Jeffreys, stalwart and founding member of the Grampian SG), as he has taken a ‘caver approach’ with Decades in the Dark.

This does not mean that the club’s many achievements, the cave discoveries and scientific work that it has been involved with, are ignored; more, that this is about the cavers who made those advances; the when and the how and the who. It makes for a fine approach to a history.

Goon is one of those inveterate though rare librarians who has not only collected a vast range of material (forcibly or otherwise extracted from fellow club members), he has made sense of it. Naturally enough the resulting book takes a chronological approach, but this is also themed. Alongside chapters on different eras (the early years, the golden years, the time of TURDS – you’ll have to read it – a coming of age, nirvana nineties and so on) are excursions into topics: the Grampian premises in Edinburgh, Scottish CRO, club publications (a useful reference, that part), the club huts ... Cave discoveries are also covered: from expeditions to India or Iran to digs in Sutherland, it is all here, but with a human approach. It is delightful to read.

Of course, a well-written screed of text remains somewhat unattractive to the eye. The most striking part of the content is the incredible wealth of relevant photographs, used to effect to draw the reader into the varied stories. In keeping with the theme, for the most part these are not stunning images, the like of which would otherwise win competitions (these mainly appear in the single colour section of pages), but are of club members at dinners, posing outside an entrance or the hut and, of course, going caving.

You most certainly do not need to be a Grampian member to enjoy reading this account. Every caver will sympathise with tales of hard digs and react to the feeling of comradeship forged through adversity and shared discovery. Here is a flavour of a lost time, a lost world, perhaps the more so for being remote from the more trammelled moors of England. Dynamite supplies under a new bang licence, inadequate toilet facilities at the hut, the nonchalant reaction of (semi) hard cavers to rescuing their beginner charges. And who could fail to be amused by the maypole made from scaffolding bars, all normal clips having been forgotten (the resulting corkscrew was not the best maypole ever made).

Decades in the Dark is, truly, a treasure; read it through and you’ll want to begin again. Your copy may be purchased direct from Alan for £20 plus £2 p&p (see p3 for contact details). And get a move on: only 200 were printed, half have gone already and there won’t be a reprint.