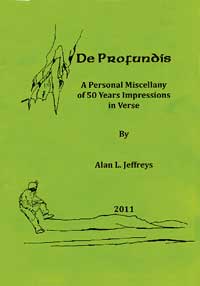 ALAN Jeffrey’s many ‘rants’ under the running theme of The Bottom Line in Descent always draw attention: they are well written and expressive; whether you agree or not with the man better known as Goon, he is entertaining. Always.

Goon (Alan Jeffreys) has now produced De Profundis, a small card-covered, A5 booklet running to 29 pages as what he describes as a ‘modest salvo’ from the Grampian SG’s jubilee publication spree. The subtitle says much of its contents: ‘A personal miscellany of 50 years impressions in verse’. An enjoyable bit of fun it is, too.

There’s caving literature, there’s caving poetry and there’s Goon. It seems that he has a quiet penchant for limericks, haiku and more traditional, serious verse, some of which have appeared in print tucked away in club journals, but the majority were written specially for this latest ‘personal whimsy’ (to quote the foreword).

So let’s offer a flavour of the contents that will surely attract more readers and, it is to be hoped, thereby more sales (although Goon would not rank this as highly as gaining readers, I suspect). Here we have, therefore, topics as diverse by title as ‘The Ingleton Caravan’, ‘A Modern Cave Society’ (with apologies to W.S. Gilbert), ‘Freud Goes Caving’, ‘The Old Tackle Room’ and, with a more serious flair, ‘On Mossdale’.And within the content, a mere two extracts to set the scene. First, the perfection of:

And second, the purity of a haiku:

Bunking in the hut,

My sleeping bag is cosy.

De Profundis costs a mere £3 plus postage direct from Alan; contact details for this and our Scotland correspondent appear on p3 of this issue of Descent.