Borneo. Memory of the caves 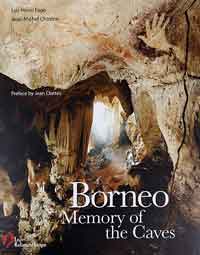 Borneo. Memory of the caves documents the results of eleven expeditions to eastern Kalimantan in Borneo by French caver and cave photographer Luc-Henri Fage, who co-authored the book with archaeologist and fellow traveller Jean-Michel Chazine. Originally in French, it has now been translated into English and Indonesian and is, not to put too fine a point on it, an elegant, beautifully conceived and executed work.

The caves in question are not extensive systems ripe for exploration – rather, they are hidden secrets within the jungle and richly decorated with prehistoric art. On the basis of his work Luc-Henri became a Rolex Award winner in 2000, having by then already completed eight expeditions, and he continued to record the artwork which has been dated to over 10,000 years old. Most are hand stencils (where paint is blow-sprayed over a hand placed on the rock, leaving its outline as a negative image: some 2,000 of these have so far been recorded) interspersed with other designs, markings and animals such as monkeys and deer. Some of the work was reported in Descent (157) and (165).

It would have been easy to produce a book which was dry with fact; a scientific record that ticked all the right boxes and safeguarded on paper the information gleaned from these remote sites, to serve as a reference for the future. Instead, Borneo recounts a personal voyage of discovery, starting with a quiet moment in 1994 while sitting in Gua Mardua looking for archaeological deposits when, on glan­cing upwards, Luc-Henri noticed artwork that came as a total shock, it was so unexpected. It was the first such discovery on the island.

Much of Borneo is, naturally enough, devoted to the art, but the book gives more of an impression of location than most. Just as the move in natural history photography has been towards behaviour and environment – showing organisms in their natural habitat – so the authors here include images of their work, the cave passages, local peoples and the jungle travel that brought them to their destinations. The book is divided into four main parts for this: ‘adventures ...’ being the land and its people, ‘ discovery ...’ on how the art was first revealed, ‘caves ...’ where individual sites are examined and ‘archaeology ...’, generalising about Kalimantan and its prehistory.

This last section is where conclusions are reached, including analysing the gender of those making the stencils (a topic also in the news on p6). For the first time, fingernails have been recorded in the prehistoric finger stencils as protruding beyond the fingertips, an unusual observation – would not these ancient people have difficulty, given their assumed lifestyles, in maintaining long and undamaged fingernails? Perhaps this says much about their culture.

Borneo closes with a plea: such a unique area deserves protection from logging, from mankind’s unthinking ravages. The authors are hoping that the caves will eventually earn the region World Heritage status – the book eminently and visually supports their desires.