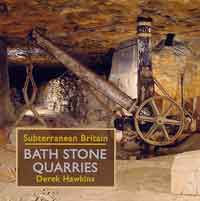 THERE can be few cavers, let alone mining history enthusiasts, who have not heard of the extensive stone quarries near Bath. While the quarries (for the uninitiated, think ‘mines’ – these are underground quarries so there are tunnels galore) are hardly the stuff of legend, tales of groups becoming lost or stumbling into secret military areas are rife. And some of them are true.

Some of the quarries, such as those at Box (generally colloquially known as Box Stone Mines) and Monkton Farleigh, even appear in the standard Mendip caving guidebook and see plenty of tourist traffic. As is their wont, many visitors take a camera (is the Cathedral at Box the most photographed mining site in the UK, or would this be the old wooden cranes?) and not a few consider how they might better their photographic skills while wondering about the region’s history – which finally brings us to the point.

In Bath Stone Quarries, Derek Hawkins presents a comprehensive photographic record of the quarries using images that he has built up over the course of four decades. His stated aim was to ensure that these relicts of a bygone age were documented before vandalism destroyed what remained or ‘safety concerns’ placed the tunnels out of reach (as is already happening). And what a superbly successful job he has made of it.

To say that this is a coffee-table book would be a disservice, however, given the well-written introduction setting out the industry’s rise and decline as well as detailing the tools and techniques used over the course of two centuries’ work; Derek credits his friend David Pollard for information supplied, both of them being past quarrymen.

The coverage of each quarry opens with a description of what may be found today and a potted history of the site, before the utterly superb photographic presentations begin, each with an extensive caption. Some of the pictures are excellent reproductions of historic photos, such as quarrymen at work or posing for the camera, stone saws in hand, and many quarries are linked to a map or survey showing their extent – these are generally old and entirely in keeping with the subject.

Many books could (and have) covered the history of these freestone mines – but none have done it better and nowhere will you find photography of a higher calibre. In short, Derek shows himself to be a master of lighting and exposure, both documenting these awesome places while he creates evocative images that, given the fine print quality, with a number of panoramic double-page spreads, shine from the page. Bath Stone Quarries is so much more than a collection of photos, but it is the photography that you will remember and, perhaps, analyse and hope one day to emulate. You will not surpass it.

It should be self-evident that this review is entirely positive (bar the lack of an index) and you should buy a copy without delay. If, however, you are not yet convinced, take a trip to http://tinyurl.com/7ogspth where you can enjoy the novelty of seeing the complete volume online; watching the slideshow pages turn will only clinch the deal.