The following report is linked with information published in Descent (245), since which time the protocols have been updated. For further details download the pdf released in November 2016.

White Nose Syndrome is a devastating disease that is destroying bat populations in North America and expanding its range at an alarming rate. The outbreak originated on the east coast of the USA and has not (yet) crossed the Rocky Mountains to gain the west coast of either the USA or Canada.

In an attempt to control the possible spread of the causative fungal spores, for some years US cavers have adopted a rigorous regime of decontaminating all clothing and equipment used underground. Following suit, Western Canada has also introduced its own controls to protect its bat populations. If you are caving in the region, whether as a local or visitor from the USA or Europe (where the fungus is extant in colonies of bats), please download the pdf released on 15 June 2015, then read and pay attention to the information provided.

Though Descent content normally stays within the printed pages of the magazine, in support of the BatCaver programme, which was established to foster cooperation between cavers and bat researchers by subsidising caving trips that place detectors in caves across British Columbia and Alberta, the Descent article that appeared in issue (245) also appears here:

White Nose Syndrome and its effect on bats in the USA has featured frequently in Descent, for example in issue (239). The causative fungus has not yet spread to Western Canada – and Adrian Duncan would like to keep it that way.

WHITE NOSE SYNDROME and its effect on bats in the USA has featured frequently in Descent, for example in issue (239). The causative fungus has not yet spread to Western Canada – and Adrian Duncan would like to keep it that way. 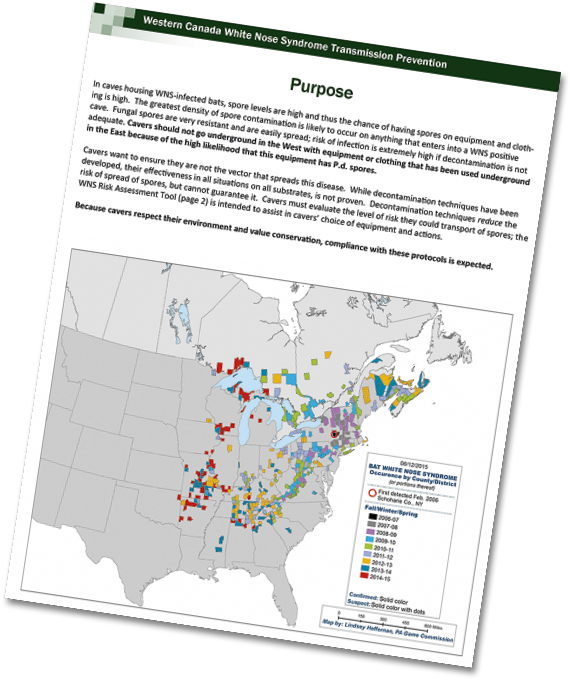 White Nose Syndrome (WNS) in bats is caused by a fungal infection and it continues to be viewed as the single greatest threat to bat populations in North America in general and Canada in particular. Thus far, WNS has been confined to eastern parts of North America, although it is spreading at an alarming rate. In affected areas, 80 to 90 per cent of some bat populations have died, with numbers in the many millions of animals. This has had a devastating effect on agriculture, since the bats are no longer performing their pest-reduction role.

A specific concern arises from the fact that the fungus which causes this condition, Pseudogymno­ascus destructans, has been confirmed as present in various parts of Europe and the UK. One school of thought is that the fungus may have affected susceptible European species in times long gone, leaving recovered populations as potential carriers. It’s likely that many of British Columbia’s unusually diverse bat populations would be eradicated in a similar fashion to those of the eastern USA if WNS were to cross the Rocky Mountains.

Although being only one of a number of vectors through which the fungus may be spread, cavers are undoubtedly potentially involved in transporting the spores. Using brand-new and hence uncontaminated gear is, of course, the best prevent­ive measure. However, such an extravagance may not always be practicable and, recognising this, in an effort to limit the spread when a caver visits a presently unaffected area, the BC Speleological Federation has joined with the Alberta Speleological Society in adopting a Western Canada WNS transmission prevention protocol.

The protocol includes steps which can be taken by visiting cavers in decontaminating their used gear prior to visiting Canada and especially Western Canada. Among other measures, this protocol suggests that gear should be immersed in hot water. The standards continue to evolve as further studies are undertaken, but the one currently endorsed by the National Speleological Society in the USA is full immersion of gear for at least twenty minutes in water at a minimum of 60°C. These figures have been adopted by Western Canadian caving organisations. 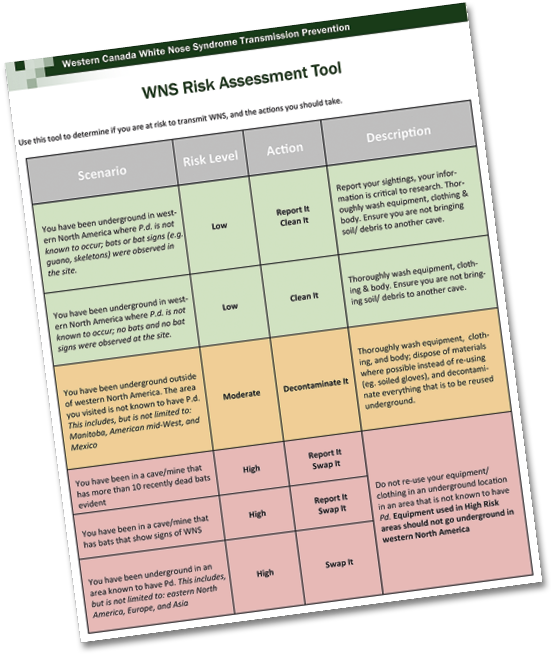 For items which are not amenable to total immersion, a range of disinfection measures are suggested. Whichever route you take, it’s essential to avoid recontamination once your gear has been thoroughly cleaned: don’t throw clean gear back into your dirty old caving bag!

Any British or European cavers planning to visit Canada will continue to be made very welcome – there’s no shortage of exciting projects! However, please would potential visitors specifically ask their Canadian contacts to supply them with the latest information on this very important issue. Since the standards are very much in their evolutionary stage, further changes can be expected and it is therefore critical that visitors should check every time before caving in Canada.

Details of the protocol, with additional information concerning the background to and known spread of WNS, is hosted on the Wild Places website at: http://tinyurl.com/WNS-in-Canada. The ‘living document’ is subject to revision and was prepared by a committee of British Columbian biologists, caving organisations and other interested parties.