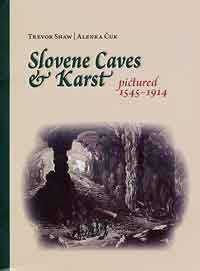 TO give this book its full title, Slovene Caves & Karst Pictured 1545-1914, reveals much of its content: these are illustrations – drawings and photographs both – of, largely, what were (and mostly still are) showcaves mixed with a smatter of surface karst features. The authors should be well known to Descent readers from previous volumes on the region’s speleohistory (most recently the 2010 Aspects of the History of Slovene Karst, reviewed in Descent 219), especially Trevor Shaw in the UK given his longer association with publishing on the subject, though Alenka Cuk deserves mention for her personal interest in cave photographs and films.

The reproduction standard in Slovene Caves & Karst is extremely high and, thankfully, it is in colour throughout. Some of the paintings are, in particular, evocative of the romantic era they originate from, with storm clouds over karst and watercolour dances underground, but all the pictures yield information that is so important in understanding the country’s heritage. It is also fascinating to see the slow transformation from painting to photography as the major means of depicting the caves and, in turn, how disseminating these images far and wide attracted more visitors and increased travel to the region.

That there were changing objectives in making these images over time is revealed in some detail by the accompanying text, placing pictures within the context of history. Let there be no mistake: the text is carefully presented and this is a major work of research, perhaps more so than its title reveals, for the in-depth analysis is so pertinent (as well as remaining eminently readable). Even if you do not read all the text, poring over the sets of photographs (many of which are obscure and unpublished until now; some of the commoner pictures have been deliberately omitted to save space, as they are well known from elsewhere) is a time-consuming pastime.

One of the major strengths, beyond treatment on a cave-by-cave basis, is the biographical lexicon that follows. This is amazingly valuable, essentially a biography of the players with, frequently, a portrait and additional illustrations such as a listing of all the photographer’s cave and karst photographs, the form of his letterhead or signatures from a visitors’ book. Full notes and references are included as well as an index.

If previous publications are a gauge, Slovene Caves & Karst may relatively quickly become hard to obtain – its print run is only 500. Certainly, considering the book’s quality (of not only its contents, but also its production), the price of 25 euros is low (its publication was supported by the Slovenian Book Agency) so, if your interest is speleohistory or even only in fine caving books, seeking a copy online is a no-brainer.