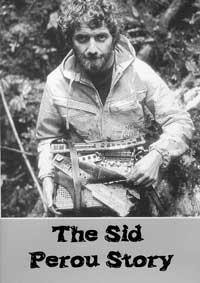 THE name of Sid Perou will be known to most cavers, surely, as the man who brought caving to the masses through the medium of his many films shown on television since the hectic days of the 1970s. His career spans four decades and won Sid both accolades and praise – no mean feat when it is difficult to produce a film that can appeal to both cavers and the general public.

In late 2010 Sid retired and emigrated from the UK, but before he left Martin ‘Basher’ Baines produced a film of his own as a tribute; it was screened to a packed audience at the 2010 Hidden Earth conference and has now been made available on DVD as The Sid Perou Story.

Tales of Sid Perou are legendary, often being associated with a poor memory (such as finding that he had forgotten to pack any film when he was at the far end of a cave). Are these true or merely fond imaginings of this respected caver? In comes the film, as it includes extracts from Sid’s many films as well as interviews with both him and those cavers he has worked with who helped him to produce his footage. The result is an hour and ten minutes of sheer delight.

The film will run in both computer and regular DVD players; it has no menu so it’s straight into the story, which soon develops into a mainly chronological coverage of Sid’s films with, interspersed, brief interludes about his childhood and personal life. In the main, cavers reminisce about how a project began, with anecdotes of what went wrong (there’s a lot of these instances) and yet how Sid always came out on top. There again, cave diving, taken on in a true ‘learn as you go’ fashion, was never one of his strong points ...

Part of the joy is in seeing quite lengthy clips of many of Sid’s films, reminders of watching these for the first time on the telly and enjoying such series as Realm of Darkness, the classic Beneath the Pennines and Secret Rivers. That some of the footage looks dated only adds to its appeal, rather than detract and it might even surprise cavers who think they know Sid’s work that the end credits list 44 titles shot by him and, in later, post-BBC years at least, edited. If you were caving in the 1970s and ’80s you can recall the clothing of that era, the techniques on ladder while wearing abominable wetsuits, and for Sid to have the vision and then to follow through by filming at the sharp end of so many squalid depths is amazing in itself.

From Sid’s initiation into filming underground for the BBC with a real cave rescue (during which the caver died – see Sid’s articles in Descent 124, 125, 126 and 128) to his final credit for Off-White and the Seven Dwarves (a pure piece of caver humour, shot for the joy of it), those seventy minutes will fly by. For Basher to have recorded for posterity the ‘story of the PSM crows’ makes the DVD fully worth the £15 price alone – you can obtain a copy through Bernie’s Cafe or direct from Basher at the Bradford PC headquarters at Brackenbottom (see the club advert on p39 for contact details).

It is a measure of the esteem that Sid is held in that his story was shot at all. Enjoy your retirement, Sid; you’ve already seen the best tribute it is possible to receive without actually having died.