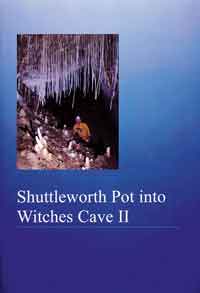 THE story of the discovery of Witches II on Leck Fell and the new Shuttleworth Pot entrance to this divers’ extension is a blend of dogged perseverance, luck, science and sheer hard work. Articles and reports in Descent have covered, for example, how the surface dig was begun, chasing as it did a transmitter signal placed by divers in an aven beneath an unlikely looking shakehole. The result: non-divers now have access and it is easier to check leads. After all, Pippikin Pot is not far distant and there are huge passages aimed at blank areas of limestone ...

It is a pleasure, therefore, to find that the CNCC has supported publication of Shuttleworth Pot into Witches Cave II, edited and laid out by Pete Monk to include the cave’s exploration history and further work conducted. A large section is given over to the rich archaeological bone deposits found below 7m depth in the entrance shaft, many of which, following their removal before damage occurred, have been identified. The number of bones and the species involved, some of them of domesticated animals, are similar to those found in other caves in the region, suggesting that pastoral communities once populated the area and may have dumped the bones at this location.

The coverage does not stop there. Jason Mallinson has described the early dives from Witches Cave, Fred Rattray the radio-location work, John Gardner the geology and geomorphology (explaining in detail some of the features seen in the cave, alongside many of Pete Monk’s photos), John Cordingley deals with geological controls on passage morphology, and Andy Walsh gives details of the entrance construction – an excellent model to use at other similar sites. Throughout, a high level of attention is given over to conservation, including generalisations on how to obtain permission to dig within a SSSI (this by Andrew Hinde).

Those involved with the dig and exploration will surely be pleased with the final production, and so they should be as it gathers together everything accomplished to date as a permanent record. Perfection, no; it has no index (arguably, it is not difficult to find general topics in the sections listed on the contents page, but you need to know something of the project to know where to look for some specifics) and the surveys and maps have suffered somewhat from their preparation format (not reproducing as crisply as they should, although the colours remain vibrant from the digital printing process).

Yet look at the price: £8 only. At this cost, much more than these few niggles might be forgiven and Shuttleworth Pot will surely sell well. Copies are available through caving shops or direct from the CNCC (see www.cncc.org.uk for details of outlets).