Mines and Minerals of the Mendip Hills 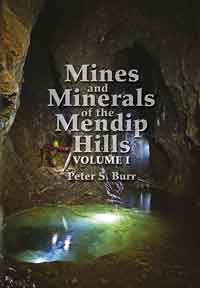 NOT many books in the caving world run to two volumes, each of a very neat 500 pages. Even aside from the nature of the content, this makes Mines and Minerals of the Mendip Hills somewhat unique as the result of Peter Burr’s research into the area’s geology and history that has taken him over thirty years to complete. Any way you look at it, this is a major contribution to our knowledge of Mendip.

Nearly forty years after working on the subject of his book, in 1967 John Gough revised The Mines of Mendip and this became the turn-to reference for anyone researching the lead mines and ores of the region. In 2012 the Mendip Cave Registry and Archive published Earth Colours (see Descent 227) and extended portions of Gough’s coverage, but Peter now adds his complementary thousand pages.

While mining enthusiasts and geologists will find the title of immediate appeal, perhaps cavers will not. The geological coverage will be obvious to all but, at least in part, any emphasis on mines alone is misplaced: mines have long seen sporting exploration and the book is full of historical details that have their own, broader appeal. Speleohistory on Mendip is a rich field and never more so than when it comes to mining remains so, as well as photographs of ores and samples, expect to find histories of mining families, an assessment of the effects of wars and the slave trade, tables of mineral rights owners, historical photographs and how miners themselves fitted into the landscape: beer and sugar consumption, house rent, tobacco costs, accidents and more. Here we have an assessment of the Elizabethan monopolies, the influx of German technology and how this was bankrolled. Sample families are traced, such as John Wookey whose lead mine was confiscated by the Lord Bishop of Wells in about 1648 and, indeed, these forms of meticulous research mean that Mines and Minerals of the Mendip Hills could be of interest to family history researchers.

The first volume, broadly speaking, looks at the mineral beds found on Mendip in general and in caves such as Banwell, Lamb Leer, Fairy and White Spot, then turns through four more chapters to inspect more closely the lead mines at Green Hill, the Rowpits and Lamb Hill plus calamine workings, each time including the social history as well as the minerals themselves. Volume 2 continues this theme (and continues the page numbering), adding chapters on ochre mines, the iron mines of Higher Pitts, Priddy Hill Farm, Ham, Nunney and Elm as well as looking at the origin of mendipite. Next come chapters on various quarries, celestite workings and mining for barytes, copper, zinc and other ores.

The book concludes with an immense reference list running to 2,700 entries for manuscripts, newspapers and other literature, closing with an index. This looks large and inclusive but, sadly, it was not prepared with the same care as the text: some pages are incorrect and many entries that should be easy to find, are not – the aforesaid John Wookey being one. It’s a shame that Word was used to compile the index; it’s creditable to include one, but this one is frustrating to actually use (the more so for those family history researchers, who will note plenty of facts but find names hard to locate).

Credit must go to MCRA for publishing such a specialist work which, presumably, was seen as having limited appeal as only 130 copies were printed. That has already been seen to be false, as at the time of writing this review only six were left unsold and a reprint has been ordered with delivery in January. Mines and Minerals of the Mendip Hills will not only become the standard reference on the subject, it will remain so for many years and if the price of £65 feels high, in the real world of publishing it is not. For your money you receive two extensive and well-printed hardback volumes that are properly bound with a hollow spine and ribbon marker; they take up 8cm of shelf space and weigh 4.3kg (postage is therefore £15, or collect in person from Alan Gray: [original review contains an e-mail address]). While this is not a book for light bedtime reading, if you have an interest in Mendip you should not hold back: this publication is both impressive and well worth the cost.