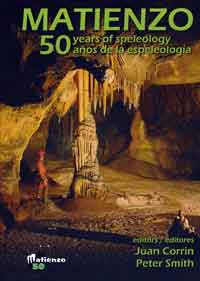 WHEN it comes to monumental projects, Matienzo. 50 years of speleology must be the top of the heap. To have prepared this history, covering five decades of exploration, must have required a phenomenal number of hours.

Cavers have visited and recorded their discoveries in this region of Cantabria in Spain since 1960 and as a result Matienzo is an absolutely packed volume. ‘Packed’ means that every spare millimetre of page bears data in, generally, a two-column layout with one in English and the other in Spanish – just think of the effort put into that translation alone. The Matienzo expeditions have earned a name for their international flavour and this has been carried through to a logical conclusion: the Brits come to visit and share, not to take ... Six of them have purchased homes in the region, so much is their affinity with Matienzo.

Let’s look at some facts. The Matienzo region covers an area of 26km2 and, as you might assume by now, is cave-rich. Initially, explorations were made by Spanish cavers but in 1969 ‘foreigners’ began to appear and thus stated their long-running love affair with this huge, closed depression in the limestone. The longest cave has been pushed to over 50km (and the deepest to 317m); the geology seems to favour long caves, if not as deep as some other areas of Europe. In total over 300km of passage have been explored, surveyed and recorded at an extremely high standard.

Which brings problems: how do you make such data accessible and usable? The website at www
.matienzo.org.uk is one route and is itself invaluable, but Matienzo now sets down in immutable form details of all the expeditions. Over 880 individuals have taken part in the expedition series to date and they will certainly enjoy reading of their own and others’ exploits, yet the book deserves a wider readership. As a history, it gets into fine, chronological detail, but it is also packed with surveys and photographs that bring the flavour of each decade. Other than a lack of index, the only criticism is that the page margins are very narrow. Packed with information they may be, but the layout lacks breathing space and the spine is likely to suffer when trying to read the text nearest the binding, as there is a natural tendency to flatten the book to make this easier.

The surveys are finely printed (no jpg compression artefacts here – these are proper preparation files!) and are backed up by a loose A1 geological map and an accompanying DVD. Run this (the instructions are quite insistent that you should use Firefox, but Internet Explorer seems to work just fine) and you may select between slideshows, movies (one of which is an old newsreel – very appropriate for this work) and maps. Start up the latter and Google will display terrain with cave locations and overlays (similar to the same facility online).

The book itself is divided into ten sections, the major of these covering the expeditions chronologically while others look at cave diving, geology, archaeology and so on. Each is entirely readable rather than only amassing data, though it is likely that expedition members will gain the most from this.

Matienzo deserves to be a successful publication, and it will surely become one. Both editors must be singled out for praise and congratulations for bringing the book to fruition with such care for facts – this is a resource that any reader inherently knows can be trusted. Alright, nothing is perfect, but there are corrections on the website. It is telling that in the first three months since publication, the list is a massive three and these are rather more additions than corrections.

To obtain a copy, e-mail Juan Corrin ([email protected]) for instructions. The £20 plus £6.20 delivery charge within the UK is a minuscule cost for the hours of sweat and toil involved in its production, let alone the 1.3kg of full colour pages that will thud through your letterbox.