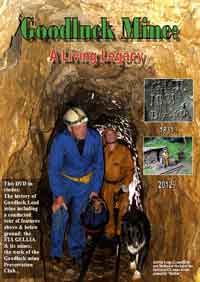 THE Via Gellia is a deeply incised valley near Matlock Bath in Derbyshire where mineral veins attracted lead miners during the 19th century – it’s named after Phillip Gell, who fancied his Roman roots, if you wondered at the name. Today, while many associated buildings survive in general use, when it comes to the mines there are only ruined remnants of what was once a busy industry, with one notable exception: Goodluck Mine, driven in 1830 and today under the care of the Goodluck Mine Preservation Club (see Descent 199).

David Webb’s work with video is well known in the caving world (for example, see p38 for his preservation of an archive film, The Underground Journey) and he was approached to produce a record of the club’s efforts in taking over the mine to ensure its future by turning it into a visitor attraction. A great deal of work was required to tidy up the site and restore and make the mine safe to the satisfaction of the Mines Inspectorate before it could be opened, a journey that has taken many years and swallowed funds – grants came from the Peak District Mines Historical Society in 2007 and the Toyota Charitable Trust in 2010. The overall result is that the mine is open to the public on the first Sunday of the month, and this will in future be promoted with the help of David’s film: Goodluck Mine: A living legacy.

The project began as a ten-minute interview with Simon Alsop, a descendant of the 1830s owner John Alsop, but gathered pace to encompass the area’s history, mining law, underground features and surface botany (orchids grow on the gunpowder store) and expanded yet further with additional interviews until it reached a full 55 minutes. The underground footage will no doubt prove the most fascinating, though only so because it is kept in context, as David shows the quality of stonework that lines the adits, the stemples and the range of incised inscriptions to be found (the modern entrance date stone is beautifully in keeping and a tableau of initials – many of which have been identified to the miners concerned – is fascinating). The re-enactment of driving a shothole and charging it ready for blasting brings home something of the labours that the old miners had to face.

Such coverage in DVD format is not an uncommon project to aid a preservation society or commercial venture by both recording a slice of time and attracting visitors, but it has to be said that David’s production is superior to most. The story retains interest to the closing seconds, aided by the many historical illustrations and maps.

Copies are available from the Peak District Mining Museum at Matlock Bath, Goodluck Mine itself when open or online using PayPal at www.goodluckmine.org, or direct from David (e-mail: [address appeared in original review]); p&p is £1.50.

Anyone interested in the Peak District or mining alike will enjoy this film; it’s likely that an hour will fly by without you realising it, so order a copy now.