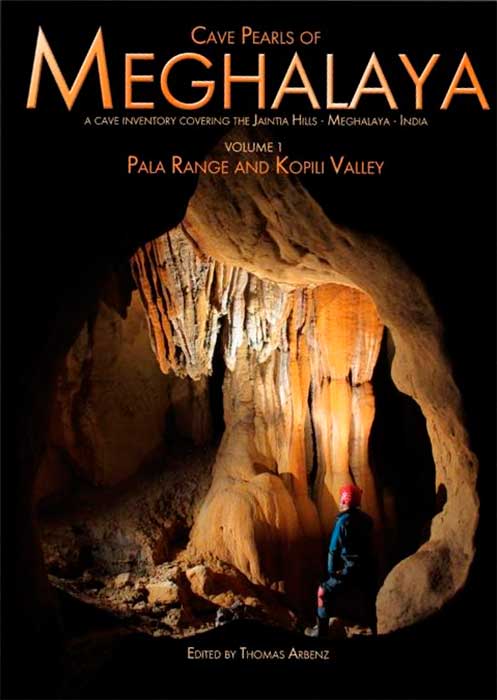 Sometimes you pick up a book and the quality oozes out. It’s almost subliminal, but all the elements are there, intermingled but not competing: fine printing, large photos, tasteful and complementary colours and greys, delicate surveys, white space used in layout to draw in the reader. Clean looking. Cave Pearls of Meghalaya is certainly impressive.

The long-running British love affair with the caves of Meghalaya in north-east India is well known and, coincidentally, a report and showcase arising from the most recent expedition opens on p23. Given the vast amount of work accomplished by the Caving in the Abode of the Clouds Project (apart from the title being catchy, Meghalaya translates from Sanskrit to ‘abode of the clouds’) by both home-grown and international cavers, it is hard to credit that it is only twenty-one years since cave exploration began here and already nearly 400km of passage has been surveyed, with plenty more to be discovered.

Such a huge amount of data has been collected during the annual expeditions that we might have seen a succession of small, individual reports published. Though some have been, alongside plenty of articles, Cave Pearls of Meghalaya is an entirely appropriate overview of what has been found to date, written to be readable rather than a dry factual assemblage. Indeed, this cave inventory is only the first volume of a continuing series of three and covers one region: the Pala Range and Kopili Valley within the Jaintia Hills, which lie in the east of Meghalaya. In this, editor Thomas Arbenz has done both the project and all those involved – to say nothing of the caving community at large – a huge service.

As might be expected, the usual chapters covering geology and ecology are present (in the latter case with some emphasis on bats and spiders, which have their own sections), with specific expedition reports for the three years from 2010 to 2012. Apart from references, a glossary and (thankfully) an index, the rest of the book – over half its content – is devoted to the caves themselves and, if the forerunning chapters were not impressive enough, this drives the message home: Meghalaya is an all-attractive place to cave.

A particularly striking factor is the multitude sections of survey. First, we have an aerial photo with caves snaking across the forest canopy in traceries of orange, then hard data providing the cave’s location, known length and vertical range coupled with a description, and finally the surveys. Most of these are split into parts, divided by a turn of the page – presenting the complete system on one sheet would have reduced the surveys to the point where the fine detail would have disappeared. The arrangement works, though some surveys are turned by ninety degrees to fit the spreads more efficiently, and even better the relief maps and larger caves – which would have been somewhat nonsensical to divide them over successive pages – are provided as pdf files on a disk. And superb they are, too, something which is only revealed on zooming in to find ever more detail expanding.

When the first publicity about the Meghalaya book series was released in 2012 (see Descent 229), incidentally this being the copyright date although the volume was not available until June 2013, it felt as though this might be a specialist volume only of interest to cavers involved in the region’s exploration. Now, with increased pagination that has no doubt permitted the open and attractive layout (courtesy Mark ‘Gonzo’ Lumley), it is clear that it has a broader appeal, if only to read the unfolding story and enjoy the presentation. Though published in Switzerland, copies are available in the UK; p&p is £6.30 and sales will support the production of the next two volumes.