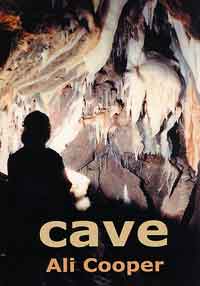 CAVE is a work of fiction, though unlike most cave-related novels that appear in print as this time the author has knowledge of the sport. Although the action occurs in a wholly imaginary cave in the Welsh hills – Quarry Cave – many other places and names mentioned in passing are real: Dan yr Ogof, Gaping Gill, Ogof Ffynnon Ddu, Wookey Hole and it is easy to see that the greater portion of the caving aspect of the book is written from experience or, as Ali Cooper mentions in the covering notes, using anecdotes told by other cavers. The Bristol Exploration Club and Brighton Explorers’ Club are both acknowledged, as is Tony ‘J-Rat’ Jarratt who, before his untimely loss to Mendip, requested that he be included in the yet-to-be-completed novel: enter Simon Prat (who isn’t one) as Sprat in a cameo role.

Given this genesis, it is easy to be sucked into wondering who Mike, Fish, Ashley or Rick or any of the other characters are based on but, in truth, they are amalgams; not that this makes it impossible to relate them to cavers you might know, but we will all end up with a favourite caver in mind and we will all come to a different conclusion. You might recognise a bit of yourself, but not the whole!

Not that Cave concentrates solely on underground action; the author describes the story as a ‘coming of age adventure’, where the relevant age is forty. Interestingly, Marty – the main character – is male, a potential challenge for a female author to tackle, which she does well. The story opens with what could turn into a fatal caving incident, placing Marty in danger but triggering recollections of his life that have led him through university years and interactions with friends to this point. Do not, therefore, expect to find a linear timeline: much is told through flashbacks (and flashbacks within flashbacks). Neither should you expect to feel real affinity or fall in love with any of the characters, unless you are male and fancy Beth; Ali has created some flawed personalities that become better or worse with every page turn.

This is not a novel written solely for cavers, so it has to cater for a general readership. Ali has cleverly introduced caving terms as a glossary definition at the start of each chapter, thus freeing her to use them within the text without causing the flow to stumble with an explanation that cavers would find irritating. There is certainly a caver mentality at work, interweaving locations such as the freestone mines at Box within the descriptions, though not all caving material is factually correct: reference to bubbling sulphurous pools in Lechuguilla Cave in New Mexico would more aptly apply to Cueva de Villa Luz in Mexico, and cave divers using a back-mounted cylinder in favour of side-mounts does not ring true.

Nevertheless, these are minor factors that disturb the theme not one jot and cavers are likely to enjoy the tale embedded within Cave, set against unfolding relationships in ‘real life’. Ali holds degrees in archaeology and psychology and the latter has certainly been drawn upon to cover the characters’ motives and interactions. It isn’t a thriller per se, but it is a whodunit in that you must wait for the ending to determine who triggered the incident at the start. Although publishing independently (this is a print-on-demand book and, perhaps because the printer deals prim­arily with publishers, the paper and production quality is higher than in other POD books seen), Ali has proved herself an accomplished author and the result lies beyond the vanity publishing that this format can encourage.

If you are attracted to take a look, some 30 per cent of the book can be downloaded as a free sample (http://tinyurl.com/6yvzdvr), though if you reach the end of this you will certainly want to read the rest, either as an eBook (£2.17) or paperback (£8.25).