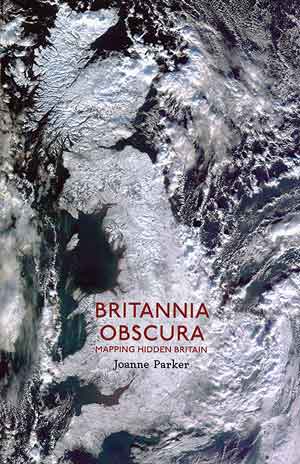 Britannia Obscura by Joanne Parker is concerned with (and is subtitled as such) ‘mapping hidden Britain’. Taken literally, this does indeed mean it takes a look at maps – just not the ones we might normally think of from the AA’s road maps, the government’s maps of population density or the familiar Ordnance Survey Landranger series (or even one of the latter’s of historic England). Instead, in each of five sections Joanne takes her lead with how some group or community views an aspect of our land, which is not necessarily standard at all.

And so we come to how the skies are laid out as designated airspace for flight paths, Alfred Watkins and his legacy of ley lines, the interconnecting canals of a lost era, the Megalithic shape of Britain through standing stones and other relicts, and – finally ­– how we cavers see the countryside, not as a surface to be traversed, but by how hollow the hills.

The opening chapter, Underground, Overground: The caver’s map of Britain, rightly concentrates on how such a map is constantly changing – this is the realm of explorers and exploration that continuously pushes frontiers and redraws the way that our caves interlink, whether physically or hydrologically.

Parker is not a caver, so she has drawn heavily (and rightly) on interviews with folk such as Chris Jewell (cave diving), Dave Nixon (on Titan’s discovery), Andy Walsh (linking up the Three Counties System) and Mark ‘Tarquin’ Wilton-Jones (Ogof Draenen). Interspersed are many snippets from history: the well-worn tale of how Gaping Gill was first descended by Martel, and of George Catcott’s investigation of Pen Park Hole; of Plumptre and Hutton and Hobbes.

It’s all fascinating stuff – though, at least in principle, much of the caving content is perhaps already known to cavers. We know about how digging works and why it is needed, we know the caving regions of the British Isles, and we certainly comprehend the nuances that otherwise are unknown to the public. And, of course, it is them that this book is intended for.

Nevertheless, it is hard to immediately see how a mere 29 pages could have got under the skin of speleology so successfully, contrasting the modern world with that long gone, yet retaining that overwhelming feeling that we must find out what is around that next corner.

Perhaps the last word should remain with Parker, who accurately draws together her mapping theme with the sentences: ‘We live in a small and populous archipelago. Yet on the caver’s map of our islands, it is still just possible to trepidatiously label regions “Unknown”. Here be dragons.’