A Bedside Book for Older Cavers 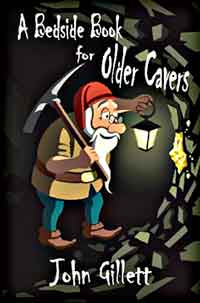 JOHN Gillett’s first book, Of Caves and Caving (see Descent 168 and 201), saw him detail his life story – at least, the part of it that relates to caving and this produced his subtitle: A way and a life. In essence, John wrote a series of cameos covering significant events or caving trips in a manner that would appeal to any caver. The book did well and the original 2002 printing went into a second edition in 2007.

Time has continued apace and John is now over seventy years old – but he remains active and, as his new title suggests, A Bedside Book for Older Cavers is intended to give all aging cavers something to read in their armchairs. More than that, his theme threading throughout the thirty stories is that everyone faces a daily challenge at some level and, no matter your age and ability, you should get out there, get on with it and do what you most desire. You might be surprised, after all, at what you can achieve and each of John’s trips, from the lava tubes of Lanzarote to Giant’s Hole, and from Sell Gill Holes to the huge French chamber of La Verna, were undertaken as a septuagenarian.

Along the way, John explores ideas such as what it means to be ‘experienced’, how risk might be quantified, the value of keeping a diary (and reading widely, including Descent), how to encourage folk of his age to take up the sport, what the loss of pubs means to our culture and, back to the theme of every caver taking on a personal goal, how ascending six floors on foot might be a personal Everest to overcome. In this, younger cavers might learn much – including, for some, a better understanding of the limitations of age; those more mature are more likely to nod, knowingly. His comparison of geriatric cavers with old banger cars forms a lovely anecdote, complete with a plea for anyone seeing an aged one struggle under a load, to please help him out.

As with Of Caves and Caving, delightful pencil drawings are scattered through the pages of what is produced by print-on-demand publishing, so while these are perfectly acceptable they are not reproduced at the highest quality, but it does mean that the book is attractively priced. The Kindle edition is even less at a shade over £3, complete with an amusing bit of legalese which does not appear in the paper edition: ‘Any reference to real names and places are purely fictional and are constructs of the author’. Yes, right!

For some light reading (including a few fictional stories), to dip into and out while relaxing by a fire, John has filled a niche that hitherto has lain empty. As he says, ‘older folk ... are time-machines for visiting the past’ (so younger cavers, ask and ye shall learn) and ‘if you are long in the tooth, caver, or non-caver, you can still be young at heart.’

One piece of text by John’s seven-year-old granddaughter Clare, written after a trip to Thistle Cave, says much: ‘My Grandad likes to go into caves. He goes into lots of caves. Granny says he is too old to go in caves now but she says it keeps him happy.’ Having described her sojourn underground, Clare ends with: ‘It was good fun. I love caving.’

Get ‘em while they’re young, eh? Keep on caving, John.