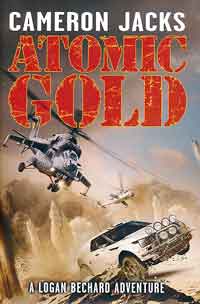 Atomic Gold is the first novel to emerge from the pen of Cameron Jacks and, being a lover of adventure stories, this is his chosen field. If you join the hero, Logan Bechard, on his travels you will find not so much a James Bond character in an Ian Fleming world, but perhaps a grittier, more bleak backdrop of motivations both political and personal, set in landscapes from Siberian cold to the furnace of Sudan.

The story opens in the deserts of Sudan in 1990, where the eyes of a refugee child observe seemingly senseless atrocities that build through the book, as they do revealing both Russian and Sudanese involvement, complete with a rebellion against the Janjaweed militia that is crucial to the plot. Bechard is British and collects wristwatches (he changes them frequently); expect fast-paced cars and action alike, coupled with detailed descriptions of planes, copters and four-by-fours – it’s that sort of book. No, it’s not so much Fleming, but more the style of a Stephen Coonts or Clive Cussler.

This being a review in a magazine devoted to underground activities, there is obviously a link with the sport. Bechard is a geologist and mining expert, which bodes well for the underlying plot. Much of the story concerns mining molybdenum, a metal used in stainless steel, that Cameron Jacks has cleverly built the plot around – here is the brutal centre of greed, of malevolent interests bent on world domination. The descriptions are good – they say you should write about your own experiences, so it is to be hoped that Jacks has not witnessed the atrocities he describes first-hand, but he has spent time in Sudan and the detail comes through over the two-decades-plus that the novel covers.

Not only do we head underground in working mines in Siberia and Sudan, but Bechard and his friend Pierre Charest enjoy caving as a hobby. Fresh from graduating at Oxford (hence reference to Oxford UCC) and, having previously explored Arctomys Cave in British Columbia (then the deepest in North America) and Hopkins Chocolate Cave in California (a strange choice to be singled out, as the easily accessible lava tube is hardly in the same league), Bechard organises a clandestine trip to Mossdale Caverns in Yorkshire. The description of the exploration is more than a passing mention (the total underground action takes up about 10 per cent of book), though readers will have to learn the outcome for themselves. You will be required to leave what you think you know of caving and limestone geology behind, however – though, thankfully, no ghosts or monsters are involved; it is, indeed, not that sort of book.

Jacks has plotted well with some intricacy, though the writing style can cause stumbles while reading – expect plenty of staccato phrases, which is a valid form of writing though the sometimes disjoined flow can take getting used to. Additionally, the text would have benefited from an extra, harder edit to pick up the typos and errors (for example, you turn east not west off the M6 to reach Grassington), correct the punctuation and tweak the layout to something that, even if only subliminal, would have been more pleasing.

The hardback copy reviewed is printed and bound to a high standard with professional cover artwork, though if you do not wish to splash out £15 a paperback edition is available for £7.99 and Kindle and e-book options are as low as £3.08 – see: www.cameronjacks.com.

If you feel like a bout of rattling escapism that draws in both caving and mining, suspend your belief in reality and go along for the thrill of the ride.