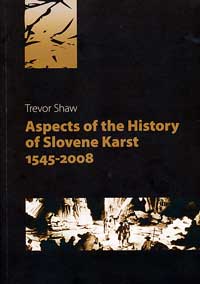 SPELEOHISTORIANS will know the name of Trevor Shaw from his plethora of articles, papers and books on the subject. In recent years he has concentrated on the underground history of Slovenia, forming a base at the Karst Research Institute in Postojna – the association is clear given that he was made an Honorary Research Fellow in 1992 and an Honorary Fellow of the Scientific Research Centre of the Slovene Academy of Sciences and Arts in Ljubljana in 1997, becoming a Slovene citizen in 1998.

Trevor’s most recent books are Names from the Past in Postojna Jama (see Descent 195) and Foreign Travellers in the Slovene Karst 1486-1900 (Descent 206), while this his latest bears a more wide-ranging title: Aspects of the History of Slovene Karst 1545-2008. It was no doubt chosen with care as the fourteen chapters are wide-ranging indeed, taking readers from references to Postojna jama (the former Adelsberger Grotte) in popular books to music in the cave, from underground post offices to publicity, oil lamps and what happened to a planned cave museum. Not all the content concerns Postojna, as nearby caves also feature along with more general themes: an Alpine Club excursion to the area, where Valvasor’s 1689 classic drawing was made, and how speleothems were (and still are) being displayed and, in caver parlance, misused. Cavers might variously be dismayed or impressed when they learn that three corridors in the parliament building in Ljubljana are lined with panels of flowstone taken from Rusa jama (the photograph shows walls stretching into the distance).

In short, this book is as fascinating as its forerunners. The production quality, from paper to printing to binding, is very high – the photographs and drawings seem to glow from the page – and the assemblage is one of those rarities: a book that truly draws together the author’s thoughts and research with clarity. The many historical illustrations hold interest, while the liberal use of quotations make what could be a dry tome into an eminently readable story. Trevor, with his collaborators Alenka Cuk and James MacQueen, has again demonstrated where a diligent – nay, exhaustive – search of all sources of literature and old picture postcards can lead us.

If you seek a summation, perhaps it is best to say that Aspects of the History is concerned not only with historical explorations and tourism, but also the more elusive aspects of mysteries to be solved. It even includes the answer to an entertaining question: did the Argonauts go underground in Slovenia? For that, you must read the book, but whether this will be easy is at least in part down to your determination in obtaining a copy. The price is good, but ordering and payment direct to ZRC Publishing may not be straightforward. Persevere – it is worthwhile – but don’t delay too long: the print run is only 400 copies.