The Archaeology of Mendip 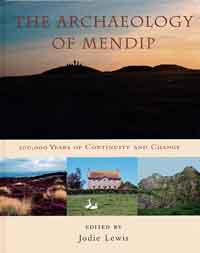 THE Archaeology of Mendip, subtitled 500,000 years of continuity and change, takes a broad look across the region through the eyes of twenty contributors who have written chapters on their specialities. Some cavers might already have switched off at this point – archaeology is not for them – but that would be a pity, as several subjects covered fall directly into the path of Mendip’s underground history. Yes, there are chapters on the likes of Roman occupation, cropmarks, early settlements and place names, the wetland fringe and Pleistocene palaeontology, but readers will also find details of the Roman mines at Charterhouse, Iron Age cave uses and a great deal of general information that is entirely relevant to anyone interested in this limestone plateau.

Take, for example, the opening chapter: The Mapping and Making of the Mendip Landscape, written by Jim Hanwell. It is typical of the many nicely illustrated and well-researched topics, including the background to how geological maps developed and how these encompassed the old mines and quarries that are of special interest today. Even non-Mendip cavers are likely to have heard of Herbert Balch and his story is part of this theme, as well as that of local societies. Given Jim’s caver-knowledge of Mendip, it is not surprising to also find caving guidebooks and volumes such as the Wessex CC publication Swildon’s Hole receive their due, along with prominent cavers such as the late Willie Stanton.

Those caves linked with the Iron Age are detailed in chapter six, the documentation showing how much the region’s amateur groups have aided research (or, in the case of older digs, arguably hindered it with a lack of good records – perhaps a problem more generally linked with times before modern methodologies became commonplace). These sites are plotted on an aerial photograph as well as being individually tabled and, indeed, the annotated photographs used alongside detailed diagrams, many in colour, are a distinctive and attractive feature of the book.

Cavers – or at the least, those also interested in man-made underground structures – are also likely to be interested in chapter fifteen: Mendip Starfish. This covers the Second World War remains still to be found on Mendip, including the history of remote and often hidden bunkers linked with the project to construct ‘false cities’ on the ground that drew enemy bombs away from their true targets (with some success, it must be said).

Archaeologists and historians will obviously be attracted to The Archaeology of Mendip; cavers should be as well, as our sport goes so much deeper (pun intended) than the physical activity: research into unlikely grovels is essential when looking at new (and old) digs. Here, you are presented not only with an overview, but a very good one of which Mick Aston (him of Time Team) writes in the preface: ‘This book is the first up to date survey of the historic environment of Mendip.’ Editor Jodie Lewis deserves her due for bringing together its contents; her introduction is rich in details of those works and authors that have gone before – here be credit for the likes of E.K. Tratman of the University of Bristol SS (a society which still has a strong archaeological leaning), digs in Aveline’s Hole, Banwell Bone Cave and Wookey Hole by eminent men such as William Boyd Dawkins and William Beard. Plenty more cavers are commendably recognised by name for their work.

The Archaeology of Mendip is destined to become a standard reference on the subject and highly likely to be consulted by cavers. Those inherently committed to the Mendip region will undoubtedly enjoy reading it for its revealing explorations of how the area came to its current form, and clubs should certainly have a copy in their libraries – the price is realistic considering its high production quality (though it does, very unfortunately, lack an index).

That this is an academic book is almost hidden by its accessibility and readability, given that learned scientific papers are so often narrow and of restricted interest; as a committed sport caver do not allow its title to put you off. It is well worth your attention.