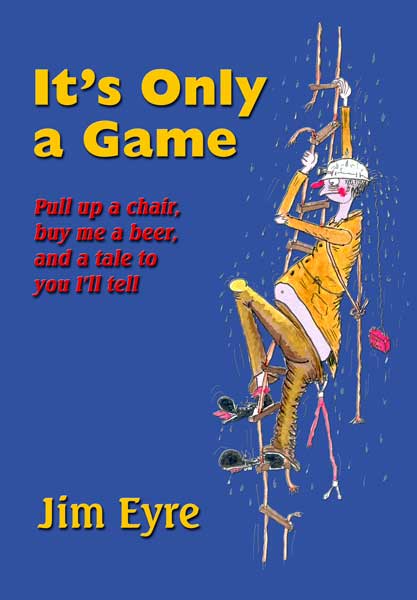 I HAVE just read – without pausing – an astonishing book. I had eagerly awaited it for several years, ever since Jim told me he was writing it, but even so I was not prepared for the breadth of its subject matter nor the richness of colour on its canvas.

Jim Eyre has comfortably occupied the role of caving legend for well over fifty years. Like one of his contemporaries, Bob Leakey, he seems to have been constructed of iron nerves, steel sinews and the dogged determination of Bulldog Drummond. He also possesses a grand capacity for turning all forms of alcohol to urine that seems to have aged him not one jot.

It’s Only a Game is a highly readable autobiography. After only brief accounts of his early childhood, Jim enters the lists just as the Second World War somewhat inconveniently interrupted both his work and leisure activities and in 1942, when he became of serving age, he volunteered for the Royal Navy. A substantial portion of the book deals with his extraordinary war service and, undisputedly, ‘Ers’ does for the navy what Spike Milligan did for the army.

As soon as hostilities ended and His Majesty could bear to dispense with his services, Jim returned his native Lancaster, took up painting and decorating (and a wife) and wasted no time picking up where he had left off potholing in the Yorkshire Dales. These were true pioneering days, well before customised kit, SRT, rigging guides and the accumulated wisdom of hindsight that dominates the sport today, and with slavering pleasure I plunged into tales of derring-do illustrated with jokes and anecdotes of side-splitting drollery.

Jim Eyre’s humour within the world of caving literature is matchless. We are fortunate to possess a whole stable of articles, not least those published in various issues of Descent, and, dare I mention it, in one of his previous volumes, The Cave Explorers, regrettably assassinated during an avoidable and entirely unnecessary lawsuit (which also brought down the Canadian-based Stalactite Press, a sadly missed enterprise). It is interesting to observe Jim selflessly casting himself as anti-hero and court jester – this from a man who regularly climbed 600 feet of wire ladder down and up Provatina during the course of a week-long expedition! Believe me, these old-time ladder men were tough cookies! Do not, however, go away with the idea that the book’s contents are entirely frivolous. Jim Eyre wields his pen like a renaissance painter his brush, so that accounts of cave rescues and the like have a poignant immediacy well suited to their subject.

Throughout It’s Only a Game, Jim’s unique style of cartooning illustrates the text with superb vignettes, and a selection of photographs adds verisimilitude. If I have a criticism, it is that these latter are generally rather small, probably to keep costs down, but for one who pores over historical pictures to examine faces of long past caving ‘megabeings’, this necessitated the use of a magnifying glass to obtain satisfactory results.

This minuscule carp diminishes to vanishing point against such a talented outpouring of words, a huge, cornucopic avalanche of immortal memories majoring on British eccentricity which should be compulsory reading. It should be owned, not just read, by every caver in the land, because I understand Jim has already written enough for a second book, carrying his story onward from the 1960s to the present day, but this is only likely to make it into print if this first volume becomes a best-seller. Buy it for yourself; buy it for your friends; buy it for your neighbours (who can’t comprehend why you go caving). But buy it. No regrets.

Further information appears on the It’s Only a Game page